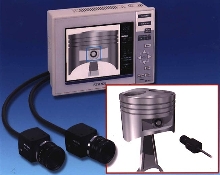 The all new CV-751 embodies Shade Scale technology, one of the most significant advancements in machine vision today, to provide users with color recognition and detection approaching that of the human eye. Other new developments include the use of ASIC (Application Specific IC) technology for ultra fast pattern search and measurement at speeds l0X faster than conventional systems - without requiring a PC or complex software. All processing and control functions are built into the CV-751 Controller.

Additional hallmarks of the CV-751 include sub-pixel (0.1 pixel) measurement, illumination adjustment and normalized correlation against image illumination changes, and an analog output for data recording.