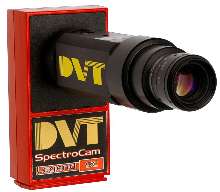 Atlanta, Mar 03, 2003 - DVT Corporation, who invented the "smart camera" over eleven years ago, has introduced the industry's first color machine vision sensors that feature a built in spectrophotometer for enhanced color recognition and segmentation.

The SpectroCam is ideal for the most demanding color applications where small color variations are critical, such as individual parts in an automobile door where one model may have several variations of white. The SpectroCam uses a built-in Spectrograph to split the incoming light into its constituent wavelengths along the X axis and spatially along the Y axis. With this product, the complete spectrum (380nm - 900nm) of the sample can be learned and small deviations detected. The peak location of the spectrum can also be monitored for LED quality control. The system is highly sensitive to color and had unlimited color learning capabilities.

Color recognition is another DVT breakthrough that has added new levels of flexibility and power to many inspection applications. Until recently, color machine vision systems were expensive, bulky and complex to implement into the factory floor. DVT's newest SmartImage Sensors represent the industry's first Ethernet-ready vision sensors with color capability.

Headquartered in Norcross, GA, DVT Corporation ignited the machine vision revolution in the early 1990s with SmartImage Sensors and has continued to upgrade, enhance and integrate the technology into the most cost-effective vision systems in the industry. Starting at $2995, all SmartImage Sensors are Ethernet ready. Whether implemented as a simple, direct connection between the SmartImage Sensor and a computer, or as a connection that crosses the globe via the Internet, DVT exploits the Ethernet's architecture to bring real-time inspections and remote diagnostics to any aspect of a company's enterprise.