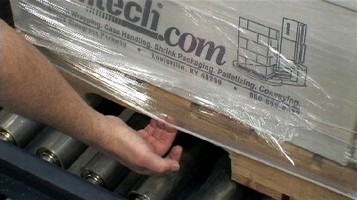 Available for retrofit on straddle stretch wrapping systems, Pallet-GripÂ® locks load to pallet with cable of film rolled into bottom wraps and placed below deck of pallet. System captures any style of pallet ranging from 4-6 in. high, while completely wrapping to top of load. By placing cable above fork-truck entry points, containment force is never compromised by tearing film with forks. Suitable for double stacking loads, Pallet-Grip helps prevent spillage and damage due to shifting.


April 2008 - Lantech introduces its new easy-adjust Pallet-Grip® load locking system for its straddle stretch wrapping systems. Pallet-Grip is a patented system that locks a load to a pallet with a cable of film rolled into the bottom wraps and placed below the deck of the pallet. The new Pallet-Grip system captures any style of pallet in a wider range of heights, from four to six inches high, while retaining the ability to completely wrap to top of the load. The system places a rolled cable of film approximately 1.5 inches (3.8 cm) below the pallet deck, while the remainder of the film web captures the load above the deck, creating the most effective pallet containment system on the market, according to Allison Myers, product manager.

"This new design rolls up the bottom film web into a cable, then places the film cable at a pre-designated point to most effectively lock the load to the pallet, unlike conventional rotary arm stretch wrappers which are unable to do this," Myers emphasizes. "This film cable is exceptionally strong, almost like a wire reinforcement built into the bottom of the web. And by placing the cable above the pallet fork-truck entry points, containment force is never compromised by tearing the film with the forks. This system physically locks a load to a pallet to prevent costly spillage and damage due to shifting. Pallet-Grip is ideal when double-stacking pallet loads, or shipping product on GMA pallets, winged pallets, plastic pallets or skids. The new design maintains a constant wrap force around load corners and over wings to eliminate any potential for tearing the film web."

"Machines equipped with the system maintain a full pre-stretch percentage to ensure lowest operating cost," she adds. "With Pallet-Grip, the force-to-pallet containment is set with the wrap force of the machine, and the amount of the film web that's rolled into cable is also controlled by the machine."

Pallet-Grip will soon be available for retrofit on Lantech overhead straddle stretch wrappers. Contact the company to confirm availability and compatibility.
Share