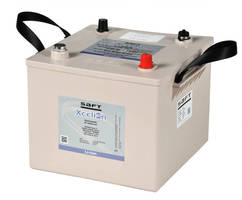 Cockeysville, MD — Saft, the world’s leading designer and manufacturer of advanced technology batteries for industry, announces the release of its Xcelion 6T™ battery for powering military vehicles. The Xcelion 6T™ is a lithium-ion (Li-ion) drop-in replacement of lead-acid batteries that provides equivalent power of two (2) lead-acid batteries at a quarter of the weight and half the volume. The launch signals the conclusion of a two-year industrialisation programme, in which Saft successfully reduced the cost of the Xcelion 6T™ to increase its commercialisation and create a versatile off-the-shelf product.

As modern military operations shift away from the frontline, the need to power the plethora of emerging sensors and communication systems installed in today’s military vehicles is putting a strain on current power systems. Saft’s Xcelion 6T™ leverages Li-ion technology to offer many benefits over lead-acid, such as longer life, higher energy density, and lower total cost of ownership. As a result, the Xcelion 6T™ enhances the capabilities of today’s military vehicles, supporting extended silent watch operations (engine off mode) and a multitude of technologies on the vehicle that must run on battery power.

In the long term, Xcelion 6T™ will reduce logistical burdens to stow, transport and distribute replacement batteries. This translates to over $200 million of savings in total cost of ownership for a fleet of 20,000 vehicles over a 20 year life. With a market size of 700,000 lead-acid batteries acquired per year by the military, Saft is positioned to achieve widespread adoption of its Xcelion 6T™ battery to offer tremendous cost savings to the end-user.

“Saft developed a competitively priced Li-ion version of the traditional lead-acid 6T battery found in nearly all military vehicles worldwide to enable the widespread adoption of this technology in defense applications and beyond,” said Thomas Alcide, President of Saft America, Inc. and General Manager of Saft’s Specialty Battery Group. “By reducing the cost and time to build the Xcelion 6T™ battery, Saft is ready to offer this product to replace lead-acid batteries, not only on all military vehicles worldwide, but also for many commercial applications.”

The Saft Xcelion 6T™ is a 28V, 60Ah Li-ion battery system that is designed within the dimensions of a traditional lead-acid battery, enabling easy installation into the vehicle. The system provides power for starting, lights and ignition, as well as safety critical devices during silent watch missions, such as sensors, jammers, communication and control equipment. It also features available CANBus communications that relays vital information, including state-of-charge, state-of-health, cell voltages, temperatures and battery diagnostics.

The Xcelion 6T™ has already been chosen for the Thales Hawkei vehicle and by Lockheed Martin for its Joint Light Tactical Vehicle (JLTV) offering. In the first quarter of 2015, Saft delivered Xcelion 6T™ batteries for use in the Hawkei’s prototype vehicles. A follow-on contract is expected to support Hawkei initial production in the fourth quarter of 2015.

Saft’s Xcelion 6T™ has completed all qualification tests, including United Nations (UN) transportation certification. It also has a NATO Stock Number, which will expand the market for the battery.

Saft (Euronext: Saft) is a world leading designer and manufacturer of advanced technology batteries for industry. The Group is the world’s leading manufacturer of nickel batteries and primary lithium batteries for the industrial infrastructure and processes, transportation, civil and military electronics’ markets. Saft is the world leader in space and defence batteries with its Li-ion technologies which are also deployed in the energy storage, transportation and telecommunication network markets. More than 4,000 employees in 18 countries, 14 manufacturing sites and an extensive sales network all contribute to accelerating the Group’s growth for the future.