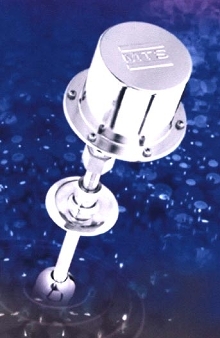 CARY, NC (April 15, 2002) - MTS Systems Corporation, Sensors Division, provides its sanitary configuration for its Level Plus R) M-Series Digital Transmitter. Designed for use in the pharmaceutical and food processing industries, the M-Series Digital offers a non-linearity of 0.008% F.S. (full scale) and hysteresis of 0.002% F.S. The NEMA 4X electropolished 316L stainless steel enclosure houses a digital level gauge that is final tested using a laser test bed. A test report confirms that the gauge meets the non-linearity and hysteresis specifications outlined above. In addition to laser testing, each gauge's sensing element is tested as a sub assembly that confirms its linearity.

"Unlike other sensing technologies such as load cells and radar, the M-Series family of Level transmitters is easier to install at a lower cost," said Adrian Totten, Level Plus Product Marketing Manager. "Using a digital magnetostrictive liquid level sensor allows for more accurate and repeatable level measurement for the pharmaceutical and food industries."

The M-Series Digital is available with a Modbus output or a MTS DDA (ASCII) protocol. The Modbus protocol allows for a 100 point strapping table to be input as well as a volume correction table that compensates for changes in density due to temperature effects. This allows the M-Series Digital to output a corrected volume or mass reading.

MTS Systems Corporation is the world leader in magnetostrictive technology. MTS Systems Corporation is a global operation, with facilities in the U.S., Germany and Japan. In the U.S., the MTS Sensors Division is an ISO 9001 facility manufacturing highly repeatable and accurate Level Plus transmitters as well as the rugged and reliable Temposonics position sensors. With a strong commitment to research and development, product quality and customer service, Sensors Division is constantly seeking ways to bring the highest value to customers.