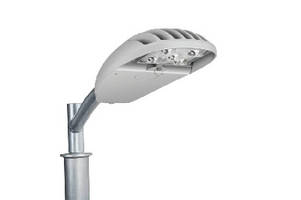 DURHAM, N.C.--Cree, Inc. (Nasdaq: CREE) announces a breakthrough innovation in street lighting with the introduction of the XSP Series LED Street Light - the most affordable and efficient Cree® LED street light designed to speed payback to municipalities. Using nearly 50 percent less energy and designed to last over three times longer than wasteful, traditional high-pressure sodium street lighting, the XSP Series can double the lumens per dollar compared to previous generations of Cree LED street lights and is the ideal choice for cities and municipalities looking to save money and resources.

The new XSP Series LED Street Light is the most affordable and efficient Cree® LED street light, designed to speed payback to municipalities.

Based on Cree's advanced LED technology, the new XSP Series was designed from the ground up to deliver incredible system efficiency of up to 100 lumens per watt and is designed to provide long L70 lifetime of more than 100,000 hours. The breakthrough street light delivers municipalities up to twice the lumens per dollar compared to previous generations and can pay for itself the first time a city avoids sending a crew and truck to replace a bulb.

"Cree XSP Series is a giant leap forward in outdoor lighting and is made possible by innovation in every aspect of the product," said Christopher Ruud, vice president and general manager, Cree lighting. "Capitalizing on innovations in Cree LED chips and components, optic technology and design, and overall luminaire design, the XSP Series exemplifies the best of Cree integrated technology. The result is the best alternative to traditional street lighting with better payback, better performance, and better pricing, allowing municipalities to focus their resources where it matters most."

Cree is leading the LED lighting revolution and making energy-wasting traditional lighting technologies obsolete through the use of energy-efficient, mercury-free LED lighting. Cree is a market-leading innovator of lighting-class LEDs, LED lighting, and semiconductor products for power and radio-frequency (RF) applications.

Cree®, LEDway® and NanoOptic® are registered trademarks and Precision Delivery Grid(TM) is a trademark of Cree, Inc. or one of its subsidiaries.