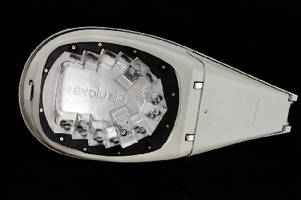 "The G2 Evolucia Aimed Optics(TM) Cobra Head Roadway Luminaire packages high quality illumination, long life and extraordinary energy efficiency -- a breakthrough performance, at up to 100 lumens per watt, up to 66% energy savings and a lifetime of over 10 years allowing us to aggressively and quickly fulfill a growing market demand for brighter, safer, low maintenance LED lighting that will change the way we light roadways, highways and streets worldwide," said Mel Interiano, CEO, Evolucia Inc., "Additionally, our new warranty underscores our confidence in the technical superiority of our product development, manufacturing and quality control. Our G2 Cobra Head Roadway Luminaires are built using only the highest quality and best performing LEDs and drivers -- allowing us to stand behind these and future products with an industry-leading standard material and parts 10 year warranty."

The new Evolucia G2 line of LED Cobra Head fixtures is available in 100 watt, 150 watt, 200 watt and 400 watt HID replacement configurations with energy savings ranging from 57% to 66% depending on the input wattages.  The product family is available in 4000K and 5000K color temperatures and exhibit a CRI of >70.

All Evolucia LED Cobra Head products operate with Aimed Optics technology. The Evolucia Cobra Head received the award for Best Outdoor Streetlight, in its class, by the U.S. Department of Energy (DOE), the International Association of Lighting Designers (IALD) and the Illuminating Engineering Society (IES) in the 2010 Next Generation Luminaires(TM) Solid State Lighting Design Competition.  This recognition provides the highest industry validation of Evolucia's Aimed Optics technology.   In Europe, Evolucia technology was recognized by the Commission of the COMPETITION FOR THE BEST PRODUCT in the 19th International Fair of Lighting Equipment LIGHT 2011 for the LED lamp Cobra Head.  Evolucia technology also received the Leader of Sustainable Development Award, during the 5th Economic Forum "Energy and Environment" in Warsaw, Poland.

"Because the light stays only where it is needed, light glare and spillage that negatively impact neighboring buildings or adjacent parcels of land do not occur," said Woody Smith, Chief Technical Officer, Evolucia Inc. "Wildlife areas that are near streets or highways remain in the dark preserving the natural habitat and communities can reclaim 'starry nights' as Evolucia Aimed Optics keeps light from polluting the dark sky."

With more than 50 million* cobra head roadway lights across all wattage offerings in the U.S. market alone, the environmental impact of retrofitting traditional roadway lighting with the Evolucia Aimed Optics product has the potential of dramatically changing energy consumption patterns of America's roadway lighting infrastructure.

According to Smith, "For example, there are 15 million 400 watt cobra head fixtures in the U.S., if we use the 400 watt LED replacement fixture, we can save as much as 250 watts of power per streetlight -- this is about 1000 kWh per year or one barrel of oil for every two lights.  If we replaced all 15 million lights in the US market, that would equal more than 7 million barrels of oil and eliminate 10 million metric tons of CO2 from being emitted into the atmosphere.  The energy savings would be enough to power more than 1 million American households. Just imagine the impact if we could replace all 50 million roadway lights."

The G2 Cobra Head LED luminaire family has been redesigned making the system lighter in weight and easy to access.  Also, a 4-bolt mounting system is included allowing the fixture to be installed by one person saving both time and maintenance costs.

Evolucia Inc. is an industry pioneer in the design, engineering, manufacture and distribution of high performance LED lighting systems to the global lighting markets.  Evolucia received the United States Department of Energy's highest award for lighting within the LED category, and has installed thousands of its fixtures at military bases, universities, municipalities, and large commercial entities.  Evolucia's LED lighting products are sold under the brand, Evolucia Lighting (www.evolucialighting.com).

More information about Evolucia Inc and its LED lighting systems is available in the company's Securities and Exchange filings, which can be found at www.sec.gov or at www.evolucialighting.com.