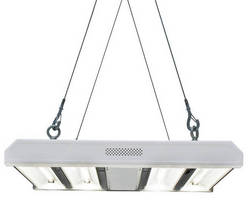 With record attendance expected, LEDucation 6 attendees will be able to participate in educational programming on LED technology, as well as view the latest product innovations from leading manufacturers. LEDucation is produced by a volunteer committee and board members from the Designers Lighting Forum of New York (DLFNY). Founded in 1934, the DLFNY is a not-for-profit organization committed to exploring and presenting the power of lighting in design.

LEDucation attendees will be able to see a Lusio Essentials Bay Series fixture and learn how these lightweight, low-profile LED high bay fixtures use up to 60% less energy than traditional metal halide and fluorescent fixtures while delivering similar or greater light output.

The diverse variety of fixtures makes Lusio an energy-saving option for most commercial and industrial applications. Additionally, Lusio stands behind all its fixtures with an industry leading 7-year warranty.