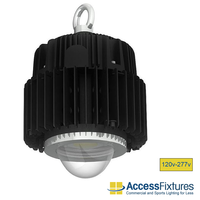 Standard features include a loop mount or a mounting bracket, a pre-wired cord for efficient installation, 80+ color rendering, various Kelvin temperatures, an LM70 50,000+ hour rated life, and a five-year warranty. For more details, speak with an Access Fixtures lighting specialist at (800) 468-9925.