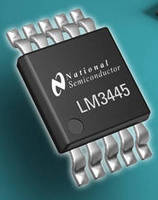 The LM3445 TRIAC dimmable LED driver maximizes the light output for systems while maintaining ENERGY STAR® power factor requirements in a typical application, positioning it among National's PowerWise® family of energy-efficient products. The new driver will be demonstrated in National's booth #426 at the Applied Power Electronics Conference (APEC) 2009 conference in Washington, D. C., from Feb. 15 to 18.

Today's TRIAC wall dimmers are designed to interface with a resistive load such as incandescent or halogen light bulbs. Since an LED bulb does not appear as a resistive load to the TRIAC wall dimmer, dimming an LED bulb using a conventional TRIAC wall dimmer does not yield optimal dimming performance. LED drivers available today cause either a 120 Hz flicker of the LEDs or do not enable the full 100:1 dimming range. National's LM3445 overcomes this challenge by translating the TRIAC-chopped waveform to a DIM signal and decoding it for a full-range of uniform, flicker-free dimming. The driver's patent-pending control architecture maintains constant ripple through the LEDs, which extends the life of the LEDs. To view a demonstration online of the LM3445 and learn more about LED lighting, visit www.national.com/led.

A complete LED system featuring the LM3445 can be created in minutes with National's WEBENCH® LED Designer. To start a design, visit www.national.com/webench/led.

The LM3445 includes a bleeder circuit to ensure proper TRIAC operation by allowing current flow while the line voltage is low to enable proper firing of the TRIAC. A passive power factor correction circuit ensures good power factor by drawing current directly from the line for most of the cycle, and provides a constant positive voltage to the buck regulator. Additional features include thermal shutdown, current limit and under-voltage lockout.

For more information on the LM3445 or to order samples and an evaluation board, visit www.national.com/pf/LM/LM3445.html.

About National's WEBENCH LED Designer
With National's WEBENCH LED Designer suite of tools, engineers can configure a system with up to 60 LEDs in serial or parallel strings. With a single keystroke, the tool selects from hundreds of high brightness LEDs, matches an LED with one of National's PowerWise energy-efficient LED drivers and creates an optimized power supply circuit. The engineer can easily "dial-in" their size and efficiency requirements, and then simulate the circuit behavior under dynamic conditions, including start-up, steady state, pulse-width modulation dimming and line transient. After fine-tuning the system in just minutes, the 'BuildIt!' feature provides a complete bill of materials for the LED circuit and the ability to quickly ship a custom prototype kit containing the selected LED, PC board, driver IC and passive components.