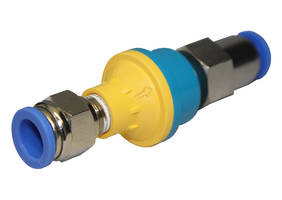 Pipe welders are now turning more and more to Inflatable Pipe Purging Systems because of their easy use to complete a weld faster and with less risk of oxidation, to save money from the speed and the avoidance of reject or cut outs.

These unique systems restrict weld purging zones, saving time waiting for pipes to be completely filled with argon, purged down to a low enough oxygen level to start welding safely, without the risk of oxidation.

It is still common however for some Inflatable Pipe Purging Systems to burst due to over-inflation, resulting in a lost weld and additional re-work.

To avoid such risks and to see that the inert gas being delivered to the pipe purging system is controlled, Huntingdon Fusion Techniques HFT® have designed and developed PurgeGate®, a unique valve which regulates the pressure and flow of gas that is passed through the system, ensuring that it will not burst regardless of the pressure and flow rate.

Ron Sewell, Chairman for HFT® said: “PurgeGate® has found valuable applications in the welding industry where inflatable devices are used for weld purging of tubes and pipes. Setting flow rates and pressures on gas regulators can be interfered with. The pressure inside a purge system can also rise dramatically during a welding sequence, to create a burst. If inflatable devices burst during a tube or pipe weld sequence then the loss of protective gas can result in a highly expensive and extremely inconvenient weld repair.”

PurgeGate® is a low cost, reusable accessory that has been designed and constructed to pass a maximum of 7.5 litres/min and 0.5 bar pressure. Other versions of 1bar and above are also available.