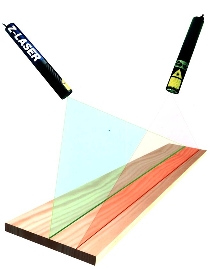 Grand Rapids, MI. - Carter Products has added a new color to their line of Laser Guide Line Lights. That decision has nothing to do with fashion. Tests show that green is more easily seen than red is. The high-powered green light in their ZG Laser is brighter, more intense, and has greater visibility. With Z-Laser technology, the new selection is available in a choice of five models each with different capabilities. The most powerful of these -the Z40G model- projects sharp, unwavering lines up to 100 feet in length in vivid green.

Carter Champion Lasers, which are available in five different models, offer the option of asymmetric distribution in the power output to compensate for mounting situations in which the laser is positioned at an angle with respect to the work surface. This means that the brightness of the line can be as intense at the end of the line as it is at the beginning.

All Carter Lasers are class 3A and a variety of mounting brackets are available to match just about any situation.

Carter has been a leading producer of woodworking machinery accessories since 1929. The company pioneered the advantages of guide line lights in the 1950s and introduced laser lights in the 70s. Besides Laser Guide Line Lights, the current product line includes Industrial Band Saw Guides, Wheels and Tires; Band Saw Guide Conversion Kits for most popular saws; the new 2-D Laser Projection Systems; Inspection Lights; the award-winning Flip-Pod® Vacuum Piece Part Holding System for CNC Routers; and other machine accessories such as the Quick Release(TM) Band Saw Tension Toggle and the Stabilizer(TM).