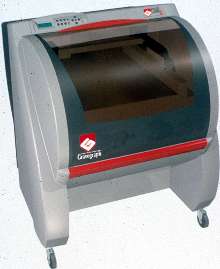 DULUTH, Ga. - Gravograph-New Hermes enters a new era in laser systems with the Gravograph-New Hermes LS500XL and LS600XL. These systems feature the very first, fully integrated, laser driver and laser software systems - the brain and the brawn to get the job done. This marks the first time in laser engraving, marking and cutting history that a laser machine and a laser software program have been developed specifically to operate in sync without requiring an additional creative design software program! The integration of the system driver and Gravograph-New Hermes LaserStyle software provides several innovative and powerful operation functions that have not been available until now! Because the machine and the software are designed for each other, there are no crossover or compatibility problems like those that arise between non-laser creative design software and laser equipment. The Gravograph-New Hermes systems include job save functions, laser color management, pure laser software with all clicks and icons related to laser functions, default settings for common materials, a nesting function that lays out shapes to minimize material waste, automatic text centering for the most popular method of text aligiiment, and built-in merge, Braille and barcode functions. One of the most time and cost-saving operation features, the new job save function, will reduce operator errors and prevent costly production mistakes even if someone other than the original engraver is running the job. Operators simply enter all job settings, such as speed, power level, design, etc., and save them for future use. With other systems and non-laser design software, job settings must be re-entered each time a job is run. The LS500XL and the LS600XL Laser Color Manager allows operators to assign various colors to different laser engraving properties. This function provides easy visual confirmation of job components such as raster, vector, line thickness, and filled or not filled. In addition to their brainpower, these integrated systems also have the brawn to get the job done right. Other features include automatic adjustment of the focal point for cutting thick objects over multiple passes and the ability to print matrix plates with the same design while merging and printing different names or text. The LS500XL and the LS600XL are easy to operate because they are built on the GravoStyle platform. Operators familiar with GravoStyle will easily understand the new LaserStyle format without requiring new training. As the worldwide leader in engraving technology, Gravograph-New Hermes provides innovations in equipment, dedicated direct customer service and comprehensive training programs for the marking and engraving industry. Formed in 1939, the company manufactures a broad line of computerized engraving systems for retail, industrial and institutional applications. The company employs more than 210 employees in the United States, Canada and Latin America. For additional information on Gravograph-New Hermes please visit gravograph-newhennes.com or call 1-800-8-Hermes.