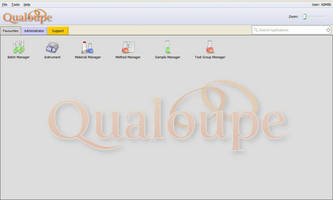 A powerful, versatile laboratory tool, Qualoupe delivers the information the user really needs while distancing them from having to understand or see the underlying LIMS data structures. The easy to install LIMS is "Quick to Go Live" which saves both time and money and minimises installation disruption.

The Web-based Qualoupe user customisable interface is principally icon-driven and features uncluttered screens using a Just Enough Information Model (JEIM) that requires minimal mouse clicks to operate. For most applications there are a maximum of four action buttons located in the same area of each screen to simplify user operation.

The interface features microformats associated with fields that are capable of linking to other systems or services. Third party application access via the user interface can be readily implemented. Qualoupe can also be easily configured to be multilingual throughout.

Qualoupe offers full audit trails and helps to simplify compliance with UKAS, FDA, ISO 17025, MRC, GLP and GMP. The system's software is optimised to share data across and between an organisation's sites and supports both manual and automated data capture.

With a combined 141 man years of experience in designing and creating successful business applications, Two Fold Software's development team's product goal was to deliver a feature rich Web-based LIMS that provides a user experience that has never been seen before. Qualoupe's configurable intuitive user interface has been expressly designed to remove the complexity of running a LIMS.

Companies such as Apple, HTC amongst others have redefined the smart phone user experience via their creative user interfaces now Two Fold is aiming to do likewise for the LIMS community. Qualoupe also significantly reduces the cost of using a fully featured scalable LIMS which means that even the smallest company can now afford the solution and benefit from increased productivity, improved quality and optimal use of resources.

Two Fold Software's development team has used its own extensive LIMS experience to evaluate the market needs and rival LIMS products. Evaluation of end user feedback shows that above all else the user community want an easy to use and intuitive product. Two Fold's analysis of the LIMS products currently on the market shows that they are all extremely complicated to operate and feature poor user interfaces. Qualoupe elegantly solves these user related issues. The design team's philosophy is to create a LIMS interface that offers: "The User Experience you Want.... With the Information you Need...."

About Two Fold Software
Two Fold Software was founded to deliver affordable business software to worldwide companies of all sizes. Businesses in the small to medium market sector in particular need access to solutions that will enable them to grow through increased efficiencies; historically the barrier for these companies has been the high cost of such software.
Two Fold Software's goals are to provide carefully designed, quality software that is fit for purpose, which has a modern highly intuitive configurable user interface, and is fully supported worldwide through a number of regional offices and remote management software.

The first product released by Two Fold Software is Qualoupe, which is a new breed of Laboratory Information Management System (LIMS) that has been designed and built to adhere to the concept of Two Fold Quality which states that a product should be manufactured to the highest standard and be fit for purpose.

Qualoupe has dramatically reduced the cost of running a LIMS, so that even the smallest company can afford the solution and benefit from productivity and quality improvements.
Share