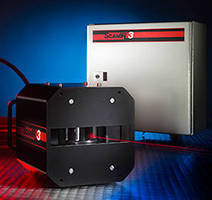 Combined with Ircon ScanView™ Pro software, the ScanIR3 scanner is designed for reliability and continuous operation in harsh industrial environments. Its robust housing incorporates standard water-cooling and air purge, and also features built-in laser sighting. A rugged processor box provides universal input and output (I/O) capabilities in the field without the need for an external computer.

The ScanIR3 linescanner has one of the fastest scan speeds in the industry and offers complete data about even the highest-speed manufacturing processes. Unlike point sensors that measure a single point, the linescanner measures multiple temperature points across a scan line. Its motorized mirror scans at rates up to 150 lines per second, allowing rapid detection of temperature non-uniformities and hot spots. Rotating optics collect infrared radiation at 1024 points within a 90-degree field of view, and industry-leading optical resolution (up to 200:1) enables detection of smaller temperature anomalies. A two-dimensional image is formed as the material moves across the linescanner's field-of-view.

The ScanIR3 system is exceptionally easy to deploy and manage: a single bundled sensing head cable with a one-click connector to the scanner allows for fast and trouble-free installation. The unit's processor box supports various industry interfaces, including Ethernet, fiber optics (optional), and analog/digital I/O.

In addition, the multifunctional ScanView Pro software allows custom configuration of ScanIR3 operating parameters, and display of thermal images and temperature profiles on a standard personal computer (PC). This enables real-time thermal imaging for temperature monitoring, display and analysis-users can quickly detect a hot spot or non-uniformity before it becomes a problem. The software includes features to subdivide thermal images from the ScanIR3 linescanner into portions of specific interest. Temperatures in each portion can be processed for a certain math function, such as average, maximum, or minimum temperature. In case of a thermal defect, a fail-safe alarm is triggered and logged. The software also includes a movie playback function for stored thermal images.

For interfacing with other control systems, temperatures are available as current or voltage analog outputs by virtue of the analog output modules provided as an option with the processor box. No PC is necessary to provide these outputs. It is also possible to output temperature values in a network via an OPC or DDE server. Users can specify security passwords and access levels with multiple language support.

The ScanIR3 linescanner is offered with an optional modular, high-temperature enclosure system specifically designed to protect the scanner from exposure to ambient temperatures up to 1994°F (1090°C). While protected in this enclosure, the linescanner can operate comfortably in high-temperature processes, such as those seen in manufacturing steel and other metals, as well as glass and a variety of minerals.

About Raytek and Ircon

Headquartered in Santa Cruz, Calif., Ircon has joined with Raytek to offer a complete IR solution, including the industry's most complete line of infrared sensors, linescanners and process imaging systems. Raytek, a Fluke company, is the worldwide leader in noncontact temperature measurement. Raytek designs, manufactures and markets a complete line of infrared (IR) temperature measurement instruments for industrial, maintenance and quality control applications. Raytek distributes its products worldwide with subsidiaries located in Europe and China. For more information, visit www.raytek.com or www.ircon.com.
Share