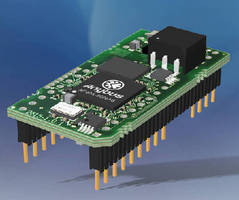 HMS Industrial Networks has extended its Anybus-IC family with the addition of the Anybus-IC for CANopen. The module is a tiny but powerful embedded single-chip CANopen interface, which is certified by the CAN user organization for conformance to the CANopen standard. The new component extends HMS´ Anybus-IC family which already includes interchangeable solutions for Profibus, Profinet, DeviceNet, EtherNet/IP and Modbus-TCP.

In a single housing of only 8cm2 in size, the Anybus-IC contains the HMS NP30 microprocessor with its integrated CAN controller and a full featured CANopen slave software stack. The IC reduces the development efforts needed to design a CANopen interface by up to 70%. Additionally, space and power supply requirements are minimized so that even small automation devices such as barcode readers or motor starters can be economically equipped with a CANopen interface.

The Anybus-IC has a 32-pin dual in line housing and requires only a single 5 Volt / 150 mA power supply. It functions as a standard CANopen slave and supports Version 4 of the DS 301 profile. Up to 144 bytes of input data and 144 bytes of output data are permitted. The Anybus-IC contains all hardware and software necessary for any automation device to communicate over a CANopen network, only the connector has to be added.

When used in intelligent devices that have their own micro-controller, the Anybus-IC is connected via a fast serial TTL interface. The IC handles the entire CANopen protocol and offloads the microprocessor from all time-critical communication tasks. For use in simple automation devices such as valve terminals, that -have no mircoprocessor, the Anybus-IC has a shift register interface and can control up to 128 direct inputs and outputs.

All members of the Anybus-IC family are interchangeable and offer device manufacturers a simple and efficient way to connect small and medium automation devices to all major fieldbus and industrial Ethernet networks with just one development.

HMS Industrial Networks is a leading independent supplier of embedded network technology for automation devices. HMS develops and manufactures solutions for interfacing automation devices to industrial networks. Development and manufacturing takes place at the head office in Halmstad, Sweden. Local sales and support is provided by the HMS branch offices in Chicago, Beijing, Karlsruhe, Milan, Mulhouse and Tokyo. HMS employs 160 people and reported sales of 23 million in 2009. HMS is listed on OMX Nordic Exchange in Stockholm in the category small Cap, Information Technology with ISIN SE0002136242.