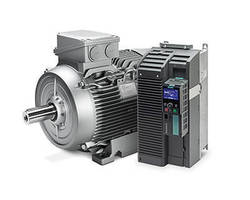 High levels of efficiency in full and partial load range

Siemens is extending its portfolio of Integrated Drive Systems (IDS) with a new drive series featuring synchronous reluctance technology, characterized by very high levels of efficiency. Reluctance motors and converters are specially designed to work together as an Integrated Drive System, enabling particularly efficient operation. Predefined parameters in the form of a code on the motor type plate simplify the commissioning process.

The new drive series is based on the proven Simotics 1LE1 motor platform, and is designed to interoperate with the Sinamics G120 converters. The Simotics reluctance motors cover an output range from 5.5 to 30 kW and are available either with an aluminum enclosure for general operating conditions (Simotics GP) or with a gray cast-iron enclosure for more aggressive operating conditions (Simotics SD). The synchronous principle means that the speed remains constant, and sensorless vector control ensures optimum performance. Both features enhance the controllability of the drive system. Ramp-up times are short thanks to the motor's low inherent moment of inertia combined with the vector control. The low losses in the rotor result in a high thermal utilization of the motor. In terms of its design and handling, the motor is similar to the 1LE1 asynchronous motors.

The Sinamics G120 standard converter incorporates vector control designed specifically for reluctance motors. The identification of the pole positions prevents jerking movements of the drive on activation, while a flying restart enables synchronization with the running motor. As part of the Totally Integrated Automation (TIA) concept, the drive series is integrated into the automation environment via Profibus and Profinet interfaces.

The reluctance technology is used in process engineering with pumps, fans, compressors, mixers and centrifuges, in materials handling applications, and in the mechanical engineering sector.