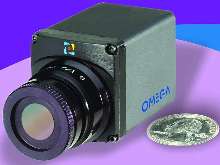 Measuring 1.35 x 1.45 x 1.90 in., Omega(TM) camera weighs less than 120 grams, consumes less than 1.5 W, and has turn-on time of fewer than 2 sec to first image. Vanadium oxide microbolometer detectors output thermal resolution of less than 40 mK when normalized to f/1.0. Camera has analog RS-170A and 14-bit digital outputs as well as one automatic function to switch into extended temperature range mode, allowing scenes to be imaged in temperatures up to 400Â°C.

The traditional thermoelectric (TE) stabilization has been completely eliminated in the Omega camera, allowing for ultra-low power consumption (less than 1.5W) and instant turn-on time of less than 2 seconds from turn-on to first image. Omega's VOx (vanadium oxide) microbolometer detectors are Indigo Systems' proprietary on-focal-plane signal processing which outputs extremely high image quality and advanced thermal resolution of less than 40 mK when normalized to f/1.0. The tiny camera has both analog RS-170A (CCIR- optional) and 14-bit digital outputs for direct support of machine vision and imaging applications. Omega features an automatic function to switch into extended temperature range mode, allowing scenes to be imaged in temperatures up to 400° C.