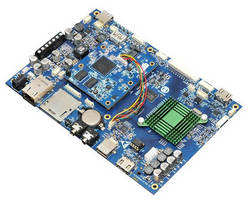 Able to play still images and full-HD videos within networks, VideoPoster-III comes in several versions offering I/O for HDMI signals as well as support for WMV and FLV formats. Windows software ACC3, included, lets users create playlists and distribute content to players via network or USB stick. Playlists can be time-dependent as well as controlled through up to 12 buttons or motion sensors. To integrate player into customized software, playlist may be regulated via network commands.

Germering (Germany) - Distec - trend-setting German supplier of TFT displays and system solutions for industrial and multimedia applications - introduces its new media player, "VideoPoster-III". This industrial full-HD media player offers numerous new features, such as enhanced playlist functions, in- and output for HDMI signals and support for the video formats WMV and FLV (flash video). The high-quality industrial media player plays still images and full-HD videos within networks. The VideoPoster-III is available in different versions: as an open frame monitor; built into Albra, Brilan, and Smart monitor housings by Data Display Solution; or as a display kit for integration into customized enclosures. The hardware and firmware and the associated Windows software ACC3 have been fully developed by the Data Display Group. ACC3 allows users to easily create playlists and to distribute the content to the players via network or USB stick.

The VideoPoster-III has been greatly enhanced, compared to its predecessor models, with the addition of essential new applications and features. For example, playlists can now be time-dependent, such as one playlist for the morning, a second for the afternoon, and off at night. In addition, the playlist can be controlled through up to 12 buttons or motion sensors; for example, button 1 = advertising 1, etc. In order to integrate the player into customized software, the playlist may be regulated via network commands. An additional HDMI input takes signals from other playback devices such as PCs, DVD or Blu-ray players. The HDMI output of the controller board is used to connect multiple HDMI displays to a player via an HDMI splitter. The media player supports the video formats WMV and Flash (F4V format). WMV is used to save a PowerPoint presentation as video and display it directly on the player. Flash video allows videos exported by Adobe tools be shown right on the player.

Distec is a worldwide operating specialist for TFT flat screen and system solutions for industrial, multimedia and digital signage applications. Located in Germering/Munich (Germany), the company designs, produces and sells innovative solutions offering the full range from components to final products. Data Display Group supplies innovative Green IT solutions based on their hardware platforms and their own software to control the TFTs of partners Samsung, Chimei Innolux, Kyocera and as well as selected panels from other manufacturers. These system solutions - from assemblies and kits up to finished OEM products - are developed in their own R&D centres in Germering (Germany), Istanbul (Turkey) and Ronkonkoma (NY/USA). The range of services includes customized developments and adaptations, product finishing and assembly of monitoring systems as well as the production of finished products and a complete after-sales service with RMA, repair and technical support. More information can be found on the homepage: www.distec.de
Share