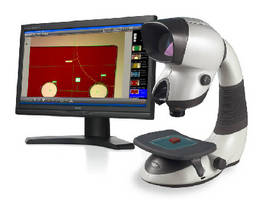 Available for stereo inspection microscopes, DimensionOne(TM) menuless image capture and mark-up software utilizes touchscreen technology and smart phone interaction. Captured images can be annotated with colors for maximum on-screen contrast, while circles, lines, points, and angles can be measured using dimensioning feature. Captured image, annotations, and dimensions can then be adjusted using opacity adjuster. Once file is complete, it can be emailed, printed, or saved.

Image Capture on a New Dimension

Vision Engineering has introduced their new 'menuless' and touch- screen imaging software for their range of stereo inspection microscopes. The latest innovative software is designed to provide ultimate ease of use for the image capture and dimensioning of component parts.

Whether requirements are just for quick image capture and mark-up or more involved on-screen dimensioning, the DimensionOne(TM) software is as capable as required.
Captured images can be annotated with a range of colours for maximum on-screen contrast. Circles, lines, points and angles can be measured using the dimensioning feature.

The captured image, the annotations and dimensions can then be adjusted using an opacity adjuster. Anywhere between 0 and 100% can be selected, with 0% showing just the dimension or annotations, and 100% just the image and no dimensions or annotations, ideal or reporting and communicating key features and measurements.
Once the file is complete, it can be simply emailed, printed or saved, .png, .jpg, .bmp, are all save options for the file.

Vision Engineering designs and manufactures eyepieceless and expanded pupil microscopes for laboratory and industrial applications. Established in 1958, more than 300,000 systems have been installed world-wide for inspection and measurement tasks. Company headquarters are based in Woking, UK with manufacturing facilities in the US and UK. Regional offices are located throughout North America, Japan, Europe and Southeast Asia.