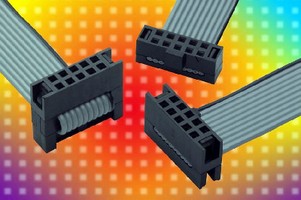 The low profile Tiger Beam IDC Cable is a 2mm (.0787") pitch socket system with a choice of up to 25 pins per row. It mates with a variety of standard Samtec 2mm (.0787") Headers and Stackers including shrouded, low profile and modified surface mount and through-hole options.

Prices vary by number of contacts and length of cable; most start at $ .10 per contact, per assembly.