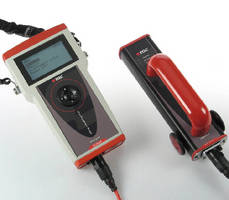 
Dutch manufacturer and developer TQC has extended their range of test products with the release of the DC9000 Hull Roughness Gauge, the next evolutionary step in hull roughness surveys. Surpassing current industrial standards with an easy to operate 4-way directional push button, graphical representations, storage of data in multiple batches and survey reports in Microsoft Excel®.

Measuring and controlling the roughness of a ship's hull plays an important roll in the performance and operating costs of a vessel. The roughness of a ship's hull increases due to corrosion and/or bio fouling. Proper maintenance and the correct application of high end anti-fouling coatings reduce the hull roughness which will lead to significant savings on fuel consumption and CO2 emissions. For that reason the hull roughness is measured during indocking and out-docking surveys.

The sensor of the TQC Hull Roughness Gauge is equipped with three non-slip wheels and a carbide tipped stylus and is moved over the ship's hull in a horizontal way collecting series of 12 measurements each. Statistics, time/date and location of each series and the average hull roughness are automatically calculated and stored in the instrument's internal memory which connects to a personal computer via USB connection.

The control unit can be operated with just one hand, 4-way directional push button operates an intuitive menu on a large illuminated display. The neck strap keeps the users hands free when required. The sensor is compact and equipped with a set of LED's to indicate the status of the instrument so operation is possible without observing the control unit.
Share