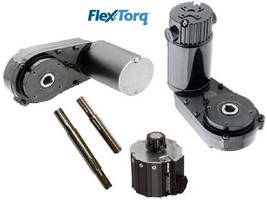 "We find that special machine builders and OEMs really like the unique FlexTorq(TM) design because its offset parallel shaft configuration fits into a lot of tight spaces and it has exceptional torque density," said John Morehead, Bison Gear's vice president, strategic planning and marketing. "The fact that the hollow shaft units can be optioned with single or double output shafts in any of three diameters or fitted with one of our TightDrive(TM) integral speed controls makes them truly versatile."