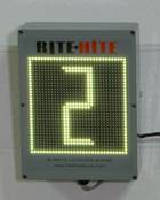 Standard on FasTrax High-Speed Doors, LED CountdownÂ® works with door’s internal timers and uses LED lights to let workers know how much time there is before door closes. When door is approached, up arrow will signal that door is opening. Once forklift or personnel exit threshold, timer will count down. Numbers will appear in white lights until 2 seconds remain; then numbers appear yellow, cautioning that door is preparing to close. Once red downward arrow appears, door will shut.

MILWAUKEE – The new LED Countdown light communication system from Rite-Hite uses LED lights to let workers know exactly how much time there is before a high-speed door closes. Sometimes a few seconds can mean the difference between a serious accident and efficient operations.

Now standard with all Rite-Hite FasTrax High-Speed Doors, the LED Countdown works in conjunction with the door’s internal timers. When the door is approached, an up arrow will signal that the door is opening. A white box will appear when the door is in a fully open position. Once the forklift or personnel exit the door’s threshold, a timer will count down. Numbers will appear in white lights until two seconds remain; then the number appears yellow. The actual time for white and yellow lights is adjustable by the end user. This is a pre-announce indicator, cautioning that the door is preparing to close. Once the red downward arrow appears, the door will shut until it is reactivated again.

This system is an alternative to – or can be the perfect complement to – high-speed doors that use clear plastic vision panels. LED Countdown timers are typically placed just outside of the door’s frame, but they can be set up anywhere that promotes the easiest visual for forklift operators and personnel.