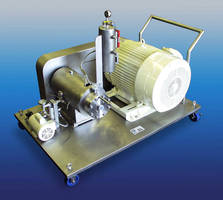 
The new Ross MegaShear Inline High Shear Mixer is the first to combine, high flow rates - up to 500 gpm without an auxiliary pump, high tip speeds - up to 18,000 fpm, and ultra high shear rates, all in a single pass.

The advantage of the MegaShear is its ability to disintegrate large particles and droplets in a single pass. By eliminating the need for inline recirculation, the mixer also delivers an important improvement in process control. Unlike recirculation systems, in which passes through the rotor/stator were estimated statistically, the MegaShear operates with exactly one pass through the rotor/stator - a statistical certainty.

With virtually 100% particle/droplet disintegration on the first pass, the MegaShear produces an exceptionally uniform particle/droplet size distribution, which is critically important for many fine emulsions and dispersions. An extremely narrow size distribution contributes to superior product stability and texture, faster solubilization, greater efficacy in the case of pharmaceuticals, greater efficiency for catalyzed chemical reactions and higher quality dispersions and emulsion in the food industry.

Further information can be obtained by calling the Ross Mixing Hotline at
1-800-243-ROSS, or by accessing our website at www.highshearmixers.com.
Share