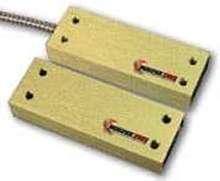 With Magnasphere(TM) switch technology, HSD (High-Security Device) is resistant to permanent contact welding from high voltage, power surges, and EMI. Product is suited for facilities in need of high-level perimeter intrusion protection. It does not have minimum magnet actuation gap and eliminates false alarms caused by actuating magnet coming too close to switch. Product can retrofit into existing installations.

Magnasphere(TM) Corp. has selected the Government Security Expo, July 23, 2003 as the platform for unveiling its new high-security contact, the Magnasphere(TM) HSD (High-Security Device).

The ability to defeat a security device through the intentional use of magnetic fields is a growing concern in the security industry. Traditional reed switch-based security contacts can be defeated from the inside of a facility using such actions. For example, an unscrupulous employee can magnetically defeat a triple balanced BMS (balanced magnetic switch) during working hours and return after hours undetected. The Magnasphere HSD's patented technology alleviates this threat of intrusion.

The HSD is targeted for those facilities that demand the highest level of perimeter intrusion protection. Government buildings, financial institutions and jewelry stores can no longer be content with existing BMS installations. The integrity of these devices is suspect and requires the Magnasphere HSD as a replacement option for devices using outmoded reed switch technology.

In addition to blocking internal defeat, the Magnasphere HSD is resistant to permanent contact welding from high voltage, power surges and EMI, which are frequent problems with reed switch contacts.

The HSD also does not have a minimum magnet actuation gap (as required by triple balanced BMS) and completely eliminates false alarms that can be caused by an actuating magnet coming too close to a switch. The HSD is competitively priced with triple balanced BMS contacts and can retrofit into existing installations or offered in smaller, more aesthetically appealing packages.

Magnasphere Corporation will be exhibiting in booth 801 at the Government Security Expo, which will take place at the Washington Convention Center, Washington, DC. The event will take place from July 23-25, 2003.