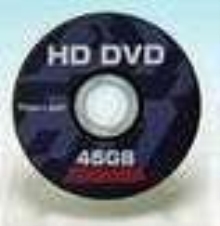 Details of these new discs will be presented at the May 11 HD DVD workshop at Media-Tech Expo 2005 in Las Vegas, U.S., the leading annual trade show for the optical disc manufacturing industry.

Memory-Tech Corporation, Japan's largest independent disc replicator, has confirmed the new 45GB and hybrid discs can be produced on their existing manufacturing lines and equipment, which are tailored to produce HD DVD discs, with only minor additional investment and minimum additional production cost per disc.

Mr. Shiroharu Kawasaki, President and CEO, Memory-Tech, said: "These new HD DVD discs will surely be welcomed by content holders, including Hollywood studios and game developers, as further broadening the scope of future applications. We have already started verification for volume production of triple-layered discs, and we are confident of early verification as they are based on the 0.6mm disc structure and established production technologies. We at Memory-Tech are fully committed to flexibly meeting variety of user requirements."

The newly developed ROM disc has a single-sided, triple-layer structure. Each layer stores 15 gigabytes of information. Triple-layer discs can be easily produced by back-to-back bonding of a 0.6mm-thick dual-layer disc and a single-layer 0.6mm disc.

In the process, a single-layer disc is first produced, using the same process as for HD DVD-ROM. Next, the second layer is formed on first layer using a one-time polycarbonate stamper, the same process used for the DVD-18 disc, the double-sided DVD disc that has dual-layers on both sides. Finally, the single-layer 0.6mm disc is bonded to the dual-layer disc, using standard technology.

The new disc brings the clear benefit of satisfying consumers, retailers, disc producers and Hollywood studios. It allows consumers to view DVD content on standard DVD players and, after purchasing an HD DVD player, to enjoy high definition content on the HD DVD layer from the same disc. The new disc structure also increases options for content providers: they can provide the same content in two formats, or use the HD DVD layer for a feature movie and the DVD layer to store promotional videos or audio content, including the movie sound track. Retailers can also promote HD DVD hardware as well as maintaining standard DVD sales.

HD DVD is the next generation DVD format being standardized at the DVD Forum, which represents over 230 consumer electronics, information technology, and content companies worldwide. HD DVD players and HD DVD video software are expected to come to market in late 2005, and will allow consumers to enjoy video content, including Hollywood movies, with crystal-clear, high-definition picture quality.

With 0.6-millimeter thick discs bonded back-to-back, HD DVD discs adopt completely the same disc structure as current DVD discs. Because of that, disc manufacturers will be able to utilize their current disc manufacturing lines with only minimum upgrades.

For more information go to the Toshiba website at http://www.toshiba.co.jp/about/press/2005_05/pr1002.htm

Toshiba Corporation is a leader in the development and manufacture of electronic devices and components, information and communication systems, digital consumer products and power systems. The company's ability to integrate wide-ranging capabilities, from hardware to software and services, assure its position as an innovator in diverse fields and many businesses. In semiconductors, Toshiba continues to promote its leadership in the fast growing system-on-chip market and to build on its world-class position in NAND flash memories, analog devices and discrete devices.

From the Japan Corporate News Network