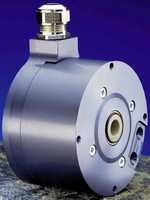 
SCHAUMBURG, IL - (November 2006) - The newest Leine & Linde heavy duty incremental model 862 encoder boasts a strong resistance to high vibration and shock, and is electrically insulated up to 2.5kV, making it an ideal choice for applications like wind power generation.

Leine & Linde's heavy, severe duty encoders (distributed exclusively in North America by HEIDENHAIN Corporation) are suited for drive and measurement applications and are often found in industries such as pulp and paper, forest and wood processing, agriculture, aggregate and mining equipment.

Leine & Linde's new model 862 encoder meets standards according to IEC 68-2-6 and IEC 68-2-27. It comes with short circuit protected outputs, as is the case with all encoders within this 800 series family, including reverse polarity protection as well. It has a relatively low profile at only 67 mm in height and a modest diameter of only 99 mm.

Also available with this encoder is the optional ADS (Advanced Diagnostics System). Simply plug the encoder into a PC via the serial port and information can be downloaded about the encoder itself including data such as the highest temperature reached, hours of operation, etc.

For more information on these encoders, Leine & Linde can be accessed directly via the web site at www.leinelinde.se or by contacting Tom Wyatt at HEIDENHAIN at (847) 884-3713 or Leine & Linde, 333 E. State Parkway, Schaumburg, IL 60173 or e-mail at twyatt@heidenhain.com.

Leine & Linde is based in Sweden with exclusive North American distribution through HEIDENHAIN Corporation in Schaumburg, IL. Leine & Linde is well known for offering high quality, heavy duty encoders of both the incremental and absolute type, are noted for their product robustness and design to cope with the harshest of environments, such as those with high vibration, dirt and cold temperatures. These heavy, severe duty encoders are suited for drive and measurement applications and are often found in industries such as pulp and paper, forest and wood processing, agriculture, aggregate and mining equipment.
Share