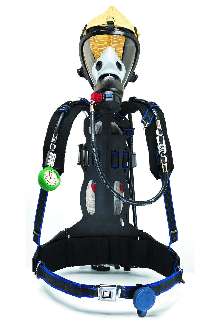 "We are committed to offering premier respiratory protection equipment, and we continue to be industry leaders by being among the first to meet the new NFPA requirements," said Steve Weinstein, Senior SCBA Product Manager, Survivair. "As one of the industry's leading SCBAs, the Survivair Panther is rugged, durable and provides reliable protection with incomparable comfort."

The new Survivair HUD utilizes a hard-wired system that nearly eliminates the complications that can occur with wireless systems. The HUD provides easy viewing on its wide-span, air-pressure-level display where four LED gas-gauge-style indicators easily differentiate readings. To provide visual notification of the air supply, each LED indicates 75, 50, 25 and 10 percent of capacity, and all four are visible when full.

Additionally, at 25 percent of the cylinder pressure, an external red LED flashes, providing a low-air alarm visible to other crewmembers. Survivair's HUD contains a photodiode that senses ambient light and automatically changes the LED's intensity to ensure the indicators are seen in bright light but are not distracting in darkness.

A single long-life battery powers the HUD and is easily accessible in the back-mounted transducer module, offering less hassle and greater dependability at a reduced cost. The module's battery status indicator allows users to check the battery before activating the SCBA, and a visual, low-battery alert in the HUD signals when it can operate for approximately eight more hours.

In August 2002, the National Fire Protection Association adopted code 1981, 2002 edition, the Standard on Open-Circuit Self-Contained Breathing Apparatus (SCBA) for Fire and Emergency Services. The code outlines the minimum requirements for the design, performance, testing and certification of SCBA for fire and emergency services personnel. This is the first standard that establishes requirements for Heads-Up Displays.

The Survivair® Panther(TM) HUD meets or exceeds all NFPA 1981, 2002 edition requirements, including providing information regarding breathing air supply status, alerts that notify the SCBA user when the breathing air supply is at 50 percent of capacity, and a low-battery alert that signals when the HUD can operate for at least two more hours.

In addition, this version mandates that all new SCBA contain a Rapid Intervention Crew/Company Universal Air Connection (RIC UAC), which provides a standard connection that allows a rescue breathing air supply to be connected to the SCBA of a fallen fire fighter or other emergency services responder. If the emergency personnel cannot be moved to a safe area quickly, another SCBA can replenish their breathing air supply.

"With the addition of the Heads-Up Display and the Rapid Intervention Crew/Company Universal Air Connection, the Panther SCBA offers the most advanced protection available for emergency services personnel," Weinstein added.

Survivair's HUD is also approved by the National Institute for Occupational Safety and Health (NIOSH) under 42 Code of Federal Regulations (CFR) Part 84.