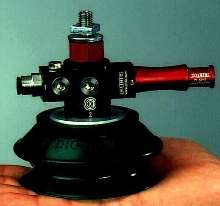 Vacuum Gripper System, VGS 3010, features polyurethane suction cup and multi-stage air driven vacuum pump integrated in a single unit. System is modularly constructed with replaceable suction cups that grip both porous, leaky materials, such as corrugated as well as coarse and curved surfaces. Suction cups are available in sizes from 1.5 to 4.5 in. dia and system can function at operating pressures below 45 psi.

PIAB, with over 30 years of experience in industrial vacuum products, now expands on their COAX(TM) technology with the Vacuum Gripper System (VGS(TM)3010). In decentralized vacuum systems, this new concept makes for more efficient material handling.

The VGS(TM)3010 features a suction cup and an efficient multi-stage air driven vacuum pump integrated in a single unit, called a "Gripper." This avoids problems in traditional vacuum systems with a centrally located vacuum pump. The dimensions of a traditional vacuum system installation take into account possible pressure loss. The VGS(TM)3010 avoids this problem because the pump and suction cup are integrated. The VGS(TM)3010 can even function at operating pressures below 45 psi. This increases reliability in case of a breakdown in the air pressure network.

The suction cups are from a specially developed polyurethane named DURAFLEX(TM). These suction cups form to many surfaces and can grip both porous, leaky materials, such as corrugated as well as coarse and curved surfaces. The suction cups in the Vacuum Gripper System are available in sizes from 1.5" to 4.5" diameters.

The Vacuum Gripper System is modularly constructed and the suction cups (with molded fittings) are easily replaceable.

In case of rapid movement, transverse loads arise that can break loose suction cups. Traditional vacuum systems often are equipped with extra suction cups to compensate for this loss of vacuum, that increases system cost and energy expenditure. PIAB's new concept features an accessory called a "Stabilizer" that can be fitted around the suction cup for support during lifts. This prevents the suction cup from coming loose, thereby retaining lifting force. The "Stabilizer" also helps hard-to-handle objects with vacuum.
Share