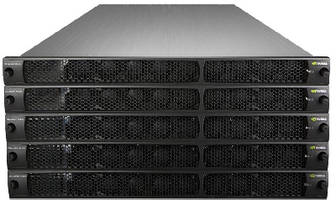 "The Quadro Plex S4 2200 is our biggest generational leap in multi-GPU Quadro Plex technology to date," said Jeff Brown, general manager, Professional Solutions, NVIDIA. "Companies working with immense 3D datasets worldwide now have the flexibility to tap into the advanced visualization capabilities offered from the four Quadro FX 5800 GPUs in a single solution - no matter where they are located."

In addition, NVIDIA continues to deliver on its commitment to application developers with today's release of a new public NVIDIA NVScale® 1.0 SDK, a toolset which allows developers to span all the GPUs seen by host system and easily scale application performance for large model rendering. The NVScale combined with the multi-GPU visualization on the four Quadro FX 5800 GPUs of the Quadro Plex 2200 S4, allows models to be accelerated up to 16-times faster, processing 1.2 giga triangles per second. This advanced performance enables massive datasets, which were previously thought to be too large for visualization, to be loaded and manipulated in real time. For more information or to download the free NVScale 1.0 SDK, please visit http://developer.nvidia.com/object/nvscale_home.html.

Pricing and Availability
The Quadro Plex 2200 S4 VCS is available in December 2008 at a MSRP of $14,995 USD. For more information on NVIDIA Quadro technologies and products, please visit: http://www.nvidia.com/quadro.
Share