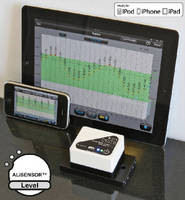 Supported with dedicated App, ALiSENSOR(TM) LEVEL data collector contains MEMS gyros, accelerometers, and microprocessor. Data of angular and translational movements are delivered via BluetoothÂ® to iOS unit, which provides environment for operator to analyze data. ALiSENSOR(TM) LEVEL offers ability to select from wide range of measurement units, self-calibration for measurement with new or special fixtures, and instant reports with all data from measurements that can be shared via email or MMS.


Maumee, OH - Greg Knitz, President of Alignment Supplies, Inc., announced today the North American launch of the ALiSENSOR(TM) LEVEL, a revolutionary new system designed for superaccurate geometric measurements. "The ALiSENSOR(TM) LEVEL is ideal for a spectrum of
geometric measurement uses, in applications of all levels of complexity," said Mr. Knitz. Of particular note is the technology of the ALiSENSOR(TM) platform, which is known as Industrial MFi (Made for iPad), a groundbreaking integration of the iPad and other iOS devices into industrial grade tools and equipment. Not only does the Industrial MFi platform offer users the ability to work with the iPads, iPhones, and iPods that they already enjoy, but also opens up a new sphere of industrial uses that can now be performed with the full range of Apple's best-selling iOS devices. "The best part," adds Knitz, "is that making use of the existing iOS devices means that the R&D and production costs have been radically diminished. This enables us to offer the
complete ALiSENSOR(TM) LEVEL system at a quarter of the price of other geometric measurement systems, making this the first next-generation, wireless measurement system that is finally affordable enough for everyone." Slated to retail at about $2500 (without iOS unit), the ALiSENSOR(TM) LEVEL is expected to be an instant hit with machinists, technicians, and operators to whom precision measurements are an essential need in production.

The ALiSENSOR(TM) LEVEL system consists of a sensor unit and an iOS unit (iPad, iPhone or
iPod Touch). The ALiSENSOR(TM) LEVEL sensor unit is a complex but rugged data collector that contains MEMS gyros, accelerometers, and a microprocessor. Data of angular and translational movements are provided via Bluetooth® to the iOS unit, which provides an unsurpassed user friendly environment for the operator to analyze the data. Typical measurement applications to be performed with the ALiSENSOR(TM) LEVEL are: straightness, level, inclination, and base flatness, with the accuracy required by precision machine workshops.

The ALiSENSOR(TM) platform is developed by GLOi AB, a pioneering company in the Industrial
MFi sphere headquartered in Mölndal, Sweden. GLOi AB was founded by Nils Andersson, a
recognized luminary of the laser alignment industry, who originally founded both Fixturlaser AB and Damalini AB, two of the biggest laser alignment and measurement companies in the world.

Andersson, along with R&D / Embedded Systems Director Ali Chitsaz and a full team of
Technical Design and Development veterans, have embraced the exceptional opportunities and possibilities of designing products directly for use with Apple's iOS devices. GLOi AB has targeted industrial product development under the "Made for iPad" program, custom developing and manufacturing hardware dedicated for the iOS platform. GLOi AB handles the whole development cycle from original idea to a finished product, featuring all the key industry standards including mechanical, software, and embedded systems design.

ALiSENSOR(TM) is a registered trademark of GLOi AB in the United States and/or other countries.