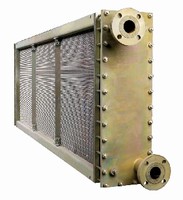 London, Ontario - Unifin, a world-leading supplier of cooling equipment and transformer oil pumps and valves to the Power Generation and Power Transformer industries, announces its line of Removable Cover Plate (RCP(TM)) generator coolers for superior performance in the most demanding applications. Unifin RCP(TM) coolers are widely used in new and existing power generation installations, from nuclear to hydro-electric to gas turbine power. Applications include both air cooled and hydrogen cooled generators.

Today's electrical generators produce not only electricity, but also heat from conductor resistance and from friction losses in the bearings. Unifin's RCP(TM) coolers effectively and reliably remove this heat, in a system that is easy to clean and maintain.

Unifin RCP(TM) coolers deliver enhanced reliability. A unique leak detector configuration is available to prevent catastrophic failure of the motor or generator. The detector senses moisture before it can leak into the air. The Unifin leak detector system consists of a unique full double-tube construction, which provides additional protection against possible leaks caused by tube erosion.

About Unifin
Unifin International, "The Hottest Name in Cooling," has been an innovative designer and manufacturer of heat transfer products for many years. Now a world-leading supplier of Transformer Oil Coolers and Pumps to the Power Generation and Power Transformer industries, the company has also emerged as a premier supplier of Large Power Generator, TEWAC Motor and Power Transformer cooling equipment. Headquartered in London, Ontario, Unifin is a part of Koch Industries Group, one of the largest privately held companies in the world. For more information on Unifin International and its complete line of heat transfer products, visit www.unifin.com or call 1-888-451-0310.
Share