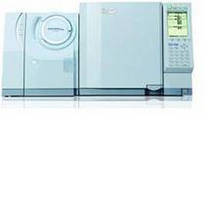 Shimadzu Corporation, one of the world's leading manufacturers of analytical instrumentation, is releasing a new gas chromatograph mass spectrometer (GC-MS) on June 1st that offers the highest performance in its class. Named "GCMS-QP2010 Ultra", it is capable of fast data measurement with sensitivity five times higher than previous models. In addition to improving laboratory productivity for high-speed analysis, it also offers improved applicability for comprehensive two-dimensional gas chromatography (GCxGC), which can achieve ultra high separation. In addition, it is the first GC-MS system to have environmentally friendly features for saving consumption of power and carrier gas. This helps reduce laboratory operating costs and minimize environmental impact. The GCMS-QP2010 Ultra is exhibited at the International Symposium on Capillary Chromatography and the GCxGC Symposium, held from May 30 in Riva del Garda, Italy.

Background of Development
GC-MS systems are used to analyze trace components in a wide variety of fields, such as environmental, foods and chemicals, including the quality control section of the food maker and research & development of pharmaceutical products. Moreover, in recent years, the use of GC-MS systems has become more common not only in food and environmental laboratories that analyze hazardous compounds but also in the fields of human healthcare, safety and security like metabolomics research for disease diagnostic makers and functional foods, etc. In such fields, the increasing numbers of samples and costs in analysis are considered critical issues and there is an increasing need for GC-MS systems that offer higher throughput and increased productivity to solve these problems. Furthermore, there has been significant interest from research centers and other laboratories in using GCxGC systems, which provide unprecedented separation levels, for researching unknown samples. The GCMS-QP2010 Ultra takes GC-MS to the limit to satisfy all of these requirements.

Variety of New Functions for Improving Productivity in the Laboratory
Significantly Improved Maximum Scan Speed and Sensitivity in Fast Analysis
New technology in mass spectrometry has been developed which allows us to increase the scan speed of our GC-MS system. This patented technology, called Advanced Scanning Speed Protocol (ASSPTM; US Patent 6610979), is the key to faster data acquisition, increasing sensitivity at high scan speeds by over five times, compared to previous models. This brings significant benefits to researchers processing metabolic compounds in food or biological samples for trace-level analysis of unknown compounds using fast GC.

High-Speed Oven Cooling for Shorter Analysis Time
Part of the new GCMS-QP2010 Ultra is the GC-2010 Plus. Using a "double jet cooling system" the GC-2010 Plus oven is cooled rapidly, e.g. in 2.7 minutes from 350°C to 50°C, an improvement of 2.6 minutes over the previous model. The combination of a high-speed GC method and a high-speed cooling oven dramatically reduces the analysis cycle. For example, in the case of VOC (volatile organic compounds) analysis, analysis time can be reduced by more than half from 37 minutes to 17 minutes.

Twin Line MS System Eliminates the Need to Swap Columns
The GCMS-QP2010 Ultra is capable of accepting installation of two narrow-bore capillary columns into the MS simultaneously. This allows users to switch applications without physically modifying the column installation. Simply decide which column is best for your analysis and choose the associated injection port. For example, regulated compounds like haloacetic acids and trihalomethanes in drinking water need to be analyzed separately using different columns. By connecting two different columns to the MS system, it is possible to perform both analyses in a single instrument without changing the columns and system configuration.

The First Environmentally Friendly GC-MS
The GCMS-QP2010 Ultra not only offers high-speed performance and increased productivity, but also eco-friendly features. Equipping the instrument with "Ecology mode" reduces the power consumed in analysis standby mode by 36%, compared with the previous model. If Ecology mode is used over one year of operation*, power consumption can be reduced by 26% and CO2 emissions can be reduced by approx. 1.1 tons. Furthermore, using a setup in which Ecology mode is incorporated into the GC-MS production line reduces CO2 emissions discharged by 30% and helium consumption by over 300 cylinders per year, compared with the previous model.

*This is based on 6 hours of use per day for 260 days over the course of a year under our standard analytical conditions.

The new GCMS-QP2010 Ultra fulfills laboratory demands for enhanced productivity through various technologies that improve throughput, and helps reduce operating costs and minimize environmental impact with its Ecology mode. With the introduction of this product, Shimadzu aims to increase its market share of gas chromatograph mass spectrometers worldwide.