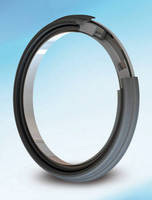 PLYMOUTH, Mich. — Reductions in fuel consumption and emissions are still at the top of the automotive industry’s wish list. Freudenberg-NOK Sealing Technologies is making valuable contributions to those goals with its Low Emission Sealing Solutions (LESS) initiative, a portfolio of products designed to help reduce friction.

The company is now single-mindedly pursuing the next generation of sealing technology with Levitex, the first nearly friction-free crankshaft seal.

Levitex is a “small revolution in engine seals,” said Karl Woll, director of the company’s Product Pre-development Global Oil Seals Division. Due to the innovative conveyance structure on its contact face, the primary ring in a Levitex seal interacts with a mating ring to form a cushion of air on which the primary ring independently floats. Air “lubrication” produces less friction than any oil. Frictional losses are reduced to a minimum. This minimal friction results in lower fuel consumption and a long operating life.

Levitex is also extremely resistant to pressure, a quality that is becoming more important in advanced engines. Prototypes are already being put through the paces at a leading German automaker and at an independent university – with gratifying results. Other European manufacturers are showing a keen interest as well. This comes as no surprise: the EU is requiring that the emissions of every automaker’s vehicle fleet average just 95 grams of CO2 per kilometer by 2020.  Savings of at least 0.5 grams CO2 should be possible with Levitex seals alone.  A 1.0 g reduction in CO2 emissions is the equivalent of approximately 0.2 mpg savings in gas for a vehicle rated at a 33 mpg.

“A year ago I would never have believed that we would come this far,” admits Sӧren Neuberger, Levitex project manager. The basic idea behind Levitex comes from a Freudenberg corporate partner, Burgmann Automotive. The Bavarian equipment manufacturer has been producing gas-lubricated mechanical seals for industrial applications, especially in turbines. The seals had a unique design: The rotary movement between the outer and inner slide rings produces a cushion of air, allowing the seal to function practically friction-free.

“Before, the transfer of the concept to automotive mass production stayed in the prototype stage for cost reasons,” Neuberger said. He took on the task of simplifying the first, highly complex generation of the seal. This “downsizing” began with the development of simulation software. The manufacturing process was analyzed and defined in terms of risk factors and the first prototypes were produced and tested.

Working with his colleagues, the Mannheim native came up with a new, radically simplified concept with just four individual parts instead of nine. Levitex took its first spin on the test stand in 2012, and it functioned as hoped right from the start. It reached a milestone by the end of last year when the first automaker customer ordered prototypes for its own trials. The automaker also validated the test findings. As a result, the customer is showing great interest in taking Levitex into regular production in 2017.

Making the leap virtually from advanced development to regular production is evidence of Freudenberg’s development expertise, speed and considerable trust by its customers.

Freudenberg-NOK Sealing Technologies is the Americas joint venture between Freudenberg and Co. in Germany and NOK Corp. in Japan. Freudenberg-NOK is a leading producer – through its Automotive, Merkel, Process Seals and Simrit sales channels – of advanced sealing technologies for a variety of markets including: aerospace; agriculture; appliance; automotive; construction; diesel engine; energy; food and beverage; heavy industry; and pharmaceutical. Founded in 1989 under the legal name Freudenberg-NOK General Partnership, Freudenberg-NOK is headquartered in Plymouth, Mich. and operates more than 20 facilities across the Americas. For additional information, please visit www.fnst.com.
Share