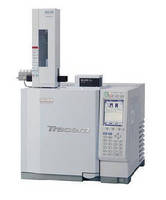 
COLUMBIA, Md., — The new Tracera gas chromatograph from Shimadzu Scientific Instruments offers a solution to scientists’ most challenging trace analysis needs. Based on the GC-2010 Plus and integrating the new barrier discharge ionization detector (BID-2010 Plus), Tracera makes it possible to reveal trace components not easily detected by other devices.

Tracera provides high-sensitivity analysis of organic compounds, permanent gases and light hydrocarbons with the BID-2010 Plus, a novel universal detector that incorporates plasma technology. The BID creates ionization from a helium-based, dielectric barrier discharge plasma. Compounds that elute from the GC column are ionized by the helium plasma energy, detected by the collection electrode and processed as peaks.

Unlike FID, which uses hydrogen, the BID-2010 Plus only uses helium as a detector gas. Therefore, it can be used in laboratories that restrict the use of FID. Its maximum operating temperature (350 degrees Celsius) supports safe, flame-free analysis of high-boiling-point liquid samples, as well as gas samples.

The architecture of the BID was designed such that the plasma generation zone is maintained near room temperature. The electrodes are positioned where they do not contact directly with the plasma. This robust design does not require routine maintenance or consumables. Additionally, analytes remain intact post-analysis for other possible uses.

“The Tracera is a ground-breaking new system that combines this new type of detector, offering features not provided by conventional detectors, with the Shimadzu GC-2010 Plus high-performance capillary gas chromatograph,” said Masahito Ueda, General

Manager of GC & TA Business Unit, Analytical & Measuring Instruments Division. “It is expected to improve the efficiency of high-sensitivity, trace-quantity analyses, and to reduce equipment and analysis costs.”

Shimadzu Scientific Instruments (SSI) is the American subsidiary of Shimadzu Corp., headquartered in Kyoto, Japan. Founded in 1875, Shimadzu is a $3 billion multinational corporation with three major divisions: Medical Diagnostics, Aerospace/Industrial and Analytical Instruments. In the United States, SSI has a network of more than 50 locations providing local and regional sales, service and technical support. Visit www.ssi.shimadzu.com for more information.
Share