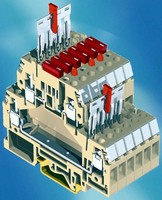 Constructed to accept ATM mini plug-in fuses, single-level MPFA.4 and double-level DSFA.4 provide fuse protection in 6 mm of space on DIN rail in cabinets. Plug-in jumper comes in metal carrier strip, which can be cut to any number of circuits. Double-level version has feed thru termination on bottom level and fuse terminal block on upper level. Similar model is available with feed thru bottom level and knife disconnect switch upper level.

Both of the new fuse terminal blocks use the popular ATM mini plug in fuses which began use in the automotive industry and have now become widely used in both industrial and process control applications. In addition to their space saving design the fuse terminal blocks incorporate the low-cost plug in jumper that is now predominant in many other terminal blocks offered by ASI. This unique jumper comes in a metal carrier strip which can be cut to any number of circuits and then simply plugged internal, thus fully insulated in the terminal block body. The design and the jumper save both time and cost when connecting several circuits together. Circuit diagrams are shown on the data sheet for several flexible circuit configurations.

The single level and the double level fuse terminal blocks are available in both a standard non-indicating version and an indicating version which provides LED indication for quick recognition of a blown fuse. The double level fuse terminal block is a feed thru termination on the bottom level and a fuse terminal block on the upper level. This design is ideal for application such as control circuits including control loops where the application calls for one side of the line to have fuse protection. A similar model is also available where the bottom level is a feed thru and the upper level is a knife disconnect switch to open up circuits.