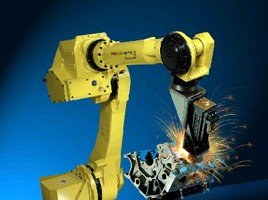 Offering payloads from 20-70 kg, 6-axis M-710iC/50 SE FoundryPRO Robot is coated with epoxy and features IP67 protection. Wrist has protective covers to withstand high-pressure washing, while base of robot purges air to avoid vapor entrance. Providing 1,360-3,110 mm reach, robot mounts to floor, ceiling, angle, and wall. Compact size and ability to flip over and work behind itself maximizes flexibility for work cell design.

The new M-710iC/50 SE FoundryPRO robot is IP67 protected for operation in the harshest environments. The entire robot is coated with a special epoxy, and the wrist has protective covers to withstand high-pressure washing. In addition, the base of the robot purges air to avoid vapor entrance.

"The M-710iC/50 SE sets the benchmark for robots working in the super harsh environments of die casting and foundry facilities," said Virgil Wilson, product manager, FANUC Robotics. "In addition to the protective epoxy and air purge, we've incorporated coated bolts, and double oil seals at the joints, making this a truly waterproof robot."

The six-axis M-710iC/50 SE is the latest member of the M-710iC robot series, which offers payloads ranging from 20 kg to 70 kg, and a reach of 1360 mm to 3110 mm. Multiple mounting methods including floor, ceiling, angle and wall, make it possible for users to have better access to unusual work pieces.

"This is an exciting robot based on its capabilities and flexibility," added Wilson, "It's rated 'best in class' for speed, and has one of the largest work envelopes in its class. In addition, its compact size and ability to flip over and work behind itself maximizes flexibility for work cell design, and saves valuable floor space."