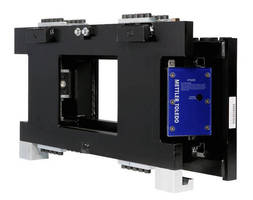 
COLUMBUS, Ohio (February 11, 2009) - METTLER TOLEDO is pleased to announce the release of its new On-Board Forklift Scale, the VFS220. Whether shipping, receiving, or managing inventory, weighing can be an extra step that slows down an operation. The METTLER TOLEDO VFS220 forklift scale changes that, enabling users to obtain accurate weight readings without transporting every load to and from a scale.

Here are just a few highlights of the forklift scale:

Easy Installation: Mounting the VFS220 scale carriage on a forklift truck is as easy as installing forks. Just hang the scale on the lift bracket; adjust the locating tab; and tighten two clamps. No welding or shimming is required.

Wireless Scale Communication: The moving scale carriage communicates with the controller by radio signal. Unlike other forklift scales, it is not connected to the controller by cables that can be damaged or cause maintenance problems. The strong radio signal is adjustable, with a range of power settings and channels.

Maximum Visibility: The scale is designed for improved safety and productivity. The center of the carriage is open, providing a high-visibility window that makes it easy for the forklift operator to see loads and position forks for lifting.

Touch Screen Operation: A user-friendly touch screen makes the scale controller easy to operate. It allows the forklift operator to complete a variety of weighing transactions in a few simple steps. Administrators have access to setup screens for customizing weighing operations.

Wireless Network: With a wireless network adapter, the scale controller can transmit data instantly to a wireless local area network. The PC card adapter uses standard Wi-Fi protocol for compatibility with any network. Because the controller utilizes Flash Memory, it will not lose data if the network goes down.

Weighing Capabilities: METTLER TOLEDO VFS220 forklift scales are programmed with the capabilities to perform a full range of weighing tasks:

Data Management: Despite its compact size, the scale controller has the full capabilities of a PC to store and transfer data. It is designed to fit seamlessly into your business operation, allowing quick and reliable data management. Weighing data is made available for download at the end of a shift or in real time using a wireless network. Download options include Ethernet, USB, and Wi-Fi. The controller is compatible with peripheral equipment such as printers, bar code scanners, and RFID tag readers.

METTLER TOLEDO is a leading global supplier of precision instruments and is the world's largest manufacturer and marketer of weighing instruments for use in laboratory, industrial and food retailing applications. METTLER TOLEDO provides weighing solutions that help customers by automating processes, increasing yields, controlling product quality and complying with industry standards and regulations. Additional information about METTLER TOLEDO can be found on the website http://www.mt.com/us.