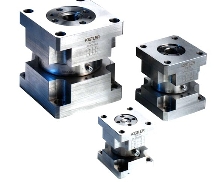 Kistler Instrument Corporation is pleased to introduce the smallest addition to its series of triaxial force links that measure the three orthogonal components (Fx, Fy, Fz) of a dynamic or quasi-static force acting upon the sensor cell. The type 9317 like the other four models in the series, contains a quartz force element preloaded between two steel mounting flanges enabling the assembly to measure both compressive and tensile forces. All force link assemblies are supplied factory calibrated, ready to be installed in the measurement application.

All force link assemblies have mounting flanges which are sized for each sensor element. They are pre-machined with threaded mounting screw holes in the top flange and have clearance holes to accommodate high strength cap screws in the bottom flange.

In actual application, the force link can be considered as a building block to be used singularly or in a group of four creating a force plate configuration. In the later, the elastic behavior of the test object does not influence the cells.

Kistler is a worldwide supplier of precision instrumentation for the measurement of pressure, force and acceleration serving the R&D, Industrial and OEM Communities.
Share