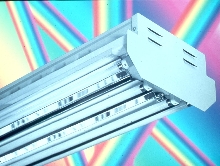 Unlike the typical bell-shaped metal halide and pulse start lamps with light paths being focused in a conical beam, the HBS100 illuminates horizontally and vertically eliminating shadows on high warehouse shelves. The average vertical surface luminance is almost twice as bright as an equivalent metal halide and more than 2.5 times as bright on the top third of a stack. Its luminance also does not significantly degrade, delivering consistent light over its entire life span.

When compared to metal halide luminaires, the HBS100 series is able to achieve significant energy savings in new and retrofit construction projects. These savings can be as much as 40% in a typical installation, paying for itself in as little as 9 months. The HBS100 instant on and instant restart allows for even more conservation adaptations such as motion sensors and multi-level lighting scenarios.

The true white light of the HBS100 means that high intensity fluorescent fixtures can be used in any application without worry of color shift or distortion. The HBS100 is manufactured in 3, 4, or 5 lamp configurations as an open strip, with a wire guard, or with a wraparound lens.

Price and Availability
The HBS100 series of luminaires is manufactured to order. The lead-time for shipment is typically 2 weeks or less, coordinated to coincide with the customer's installation. Suggested contractor price of the base fixture starts at $185. Volume discounts are available. Prices will also vary depending on the number of lamps in a fixture and accessories.

About L.A. Lighting
L.A. Lighting specializes in the design and manufacturing of innovative fluorescent lighting fixtures for the construction industry. Its R&D department continually adapts the latest ballast, lamp and reflective imaging technology for a variety of off-the-shelf as well as custom fixtures to support its diverse customer base of architects, lighting specifiers, project managers, contractors, and distributors in the industrial, warehouse, film, theater, office and retail markets.
Share