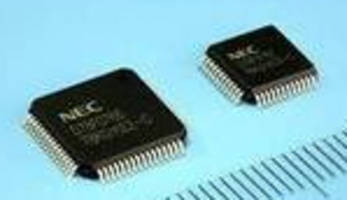 The new chips target the rapidly growing digital AV market. They are designed for use in devices such as flat-panel TVs and Blu-ray disc players.

Reducing power consumption is important both to meet the growing consumer demand for environmentally friendly products and to comply with environmental regulations. In the European Union, PCs, digital AV equipments and other electronic devices will be required to consume no more than 1 to 2 watts in standby mode starting from January 2010.

Many AV devices support the High-Definition Multimedia Interface (HDMI), a standard interface that allows digital AV devices to exchange audio, video, and control signals through a single cable. High-end devices will also support CEC, which promises to control AV components that support the HDMI standard. For example, when a user presses the playback button on a Blu-ray disc player, the disc player can automatically turn on a digital TV and display the playback picture via the CEC interface.

Until now, system designers needed to use their custom software to ensure connectivity between the system and multiple AV components. In this method, a host CPU must be powered on and running in order to monitor the state of the device and wait for CEC and remote control signals.

NEC Electronics' new MCUs with on-chip CEC controllers allow the CPU to be powered off during standby mode and speed up CEC and HDMI certification process while reducing power consumption and the need to develop custom software.

The main features of the new MCUs as follows.