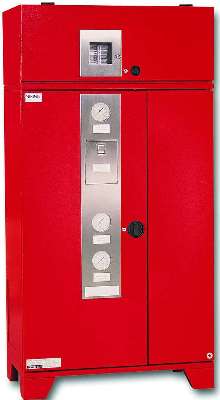 TotalPac2 fail-safe, fire protection units are built on company's EZ Trim and are available in Dry, Deluge, Single-, and Double-Interlock Preaction and FirecycleÂ® III systems. Three models include skid containing pre-assembled trim on 14 ga steel base, remote controlled unit without integrated panel, and fully equipped self-contained unit. Pre-assembled, pre-tested models come in sizes from 1-1/2 to 6 in. and are UL and C-UL Listed.

The new units are built around the Viking EZ Trim (rated to 250 psi) and are available in several configurations, including Dry, Deluge, Single-, and Double-Interlock Preaction and Firecycle® III systems. TotalPac2 is also available as a fail-safe system using Viking's exclusive SUREFIRE(TM) Trim.

The new TotalPac2 is now available in three easy-to-install models:
·A basic skid containing the pre-assembled trim on a sturdy 14-gauge steel base (including control valve, alarm & tamper switches, drain piping and release trim)
·A remote controlled unit for applications with an existing releasing panel (essentially a Totalpac unit without an integrated panel)
·A fully equipped self-contained unit with all the features and benefits that the industry has grown accustomed to

All pre-assembled, pre-tested models are available in sizes from 1-1/2" to 6" and are packaged in a new architecturally pleasing enclosure - unlike anything in the industry! They are UL and C-UL Listed as assembled units and FM and MEA Approvals are pending.

Viking is a leader in the manufacture and distribution of innovative fire protection equipment. Their products are sold in over 70 countries worldwide through an integrated distribution network.

Contact your local Viking SupplyNet representative for detailed information and pricing on this exciting new product. For more information on the TotalPac2® or Viking and its related products, visit our web site at www.vikingcorp.com or call 877-384-5464.
Share