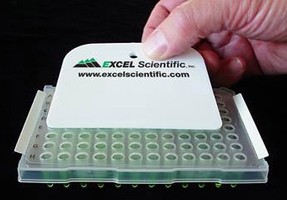 Able to withstand temperature from -40 to +125Â°C, ThermaSeal A(TM) Sealing Film incorporates thick adhesive layer for secure sealing of microplates in PCR and storage applications, such as reagent-handling. Shaped to fit within rim of raised-rim plates for sealing of all wells, polypropylene film can also be used for sealing standard microplates. Each film has 2 removable end tabs that aid in positioning film to plate.

New Films Have Strong Adhesive for PCR Sealing and Storage

These films are an Advanced Version of classic ThermalSeal® polypropylene films. ThermalSeal A films incorporate a stronger and thicker adhesive layer for more secure sealing of microplates in PCR and storage applications.

Although shaped to fit within the rim of raised-rim plates for more reliable sealing of all wells, ThermalSeal A films can also be used for sealing standard microplates.

Each film has two removable end tabs that aid in positioning the film to the plate. Recommended temperature range is -40°C to +125°C.