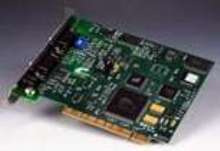 Advantech's new AD-CIF series supports remote input and output modules for real-time data transfer between PCs and field automation equipment. Through the Fieldbus master/slave communication functions, the master cyclically monitors and controls multiple slaves to ensure a balance between the best possible performance and the highest degree of reliability.

The biggest advantage of the AD-CIF series when comparing to other communication cards, is the dual-port memory. This memory helps to independently exchange data between devices on the bus, and relieves the CPU from some processing tasks. The result is higher transmission rates and excellent reliability.

The AD-CIF series can be used under Windows 95/98/ME/NT/2000/XP and Linux with full driver support. In addition, with the AD-CIF series' configuration tool - SyCon System Configurator; you have a graphical user interface for the individual buses, clearly structured menu guidance and automatic computations of bus parameters, making configuration effortless.

The AD-CIF series is available for sale by calling 1-800-800-6889. For more information, visit advantech.com/eautomation.