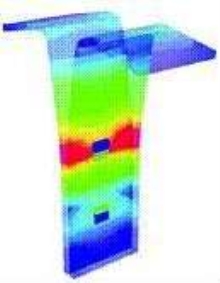 New ABAQUS® Version 6.5 Increases Analysis Power and Ease of Use

The company's highly regarded analysis products, ABAQUS/Standard and ABAQUS/Explicit, include new developments in contact, in fracture and failure analysis, and in parallel computing performance. This release also heralds a dramatic step up in integrated, interactive modeling and results visualization, with important new features in the interactive product, ABAQUS/CAE.

With more than 130 enhancements across the software suite, ABAQUS Version 6.5 achieves a new overall standard for performance, usability and simulation fidelity while upholding a distinguished reputation for flexibility and reliability.

"ABAQUS/CAE Version 6.5 has proved to be effective in creating complex finite element models for our most challenging analyses," commented Dr.-Ing. Andreas Bottcher of Siemens Power Generation, Gas Turbine Engineering. "The new meshing capabilities allow us to create appropriate element densities, and the ability to access analysis results across the network helps us better leverage our hardware resources."

"With strong advances in usability, ABAQUS Version 6.5 becomes a fully integrated simulation environment for the dedicated ABAQUS user," said Ken Short, Vice-President of Marketing at ABAQUS. "It features a number of innovations that help analysts navigate the finite element modeling environment and implement simulation workflows that are more productive and closer to real-world behavior. Engineers who have come to rely on the power of ABAQUS simulation technology will quickly appreciate the advantages of using the integrated ABAQUS suite."

-- Industry-leading contact has been a hallmark of ABAQUS/Standard for some time. This release provides further improvements in accuracy, performance and robustness via such developments as new contact formulations and stabilization techniques. ABAQUS/Explicit also offers several improvements in contact - for example, the ability to define initial clearances and to control initial overclosures for general contact.

-- New capabilities in the area of fracture and failure represent a long-term development initiative at ABAQUS, and Version 6.5 delivers the first fruits of this undertaking. A new framework for simulating progressive failure allows ABAQUS/Explicit to model damage and failure of materials, fasteners and other connection types based on relevant criteria. In addition, new cohesive elements in ABAQUS/Explicit and ABAQUS/Standard can be used to model separation between two initially bonded surfaces, such as is required for progressive failure of adhesives or composites. Modeling and visualization for fracture and failure has also been considered, as ABAQUS/CAE now provides support for fracture mechanics analyses with the ability to define cracks and to create appropriate meshes. Finally, ABAQUS/Standard can be used in many applications that require the modeling of wear/erosion of material at one or more surfaces, such as automotive tire wear and certain geotechnical applications.

-- Optimizing computing performance is a strategic priority for ABAQUS software. Version 6.5 offers improvements in a number of areas that combine to significantly reduce turnaround times for solving large finite element models. The advent of new parallel element operations in ABAQUS/Standard, together with the already available parallel solvers, results in complete parallelization of many ABAQUS/Standard analyses and provides notable performance gains. Memory requirements for parallel execution of ABAQUS/Explicit have been reduced appreciably, and scalar and parallel performance improvements in ABAQUS/Explicit combine to provide significant reductions in solution time. In addition, distributed memory parallel (DMP) execution is available with both ABAQUS/Explicit and ABAQUS/Standard, which enables ABAQUS to be run in parallel on various types of clusters.

A Focus on Analyst Productivity

Version 6.5 of ABAQUS/CAE offers a long list of new features and enhancements to improve usability, including the introduction of the Model Tree. The Model Tree provides a visual description of the hierarchy of objects in a model and is a convenient tool for navigating and managing finite element models. The Model Tree can act as a guide for new users of ABAQUS/CAE, since the arrangement of the objects in the tree reflects the order in which users are expected to create their model.

Another important addition to ABAQUS/CAE is tetrahedral meshing technology that, when combined with new curvature-based mesh sizing, provides industry-leading performance, robustness and element quality. The new "view cut" capability allows the analyst to see how results vary inside the model. View cuts can be planar, cylindrical or spherical, or they may be isosurfaces of a specific result quantity.

Analyst productivity will also benefit from the new network ODB (output data base) connector. This feature allows users to access their ABAQUS results files across the network for visualization with little performance degradation, thereby eliminating the need to move the often sizable results to their local desktop computer.

Founded in 1978, ABAQUS, Inc., is the world's leading provider of software, technology and services for advanced finite element analysis. The ABAQUS(r) software suite has an unsurpassed reputation for technology, quality and reliability. It has been adopted by major corporations across all engineering disciplines as an integral part of their design process. ABAQUS offers a powerful and complete solution for simple to complex linear and nonlinear engineering problems, using the finite element method. A wide range of structural, thermal and coupled analyses is supported. The software delivers a unified finite element analysis environment without equal, presenting a compelling alternative to implementations involving multiple products and vendors.

ABAQUS employs over 430 people worldwide, with 28 direct offices for technical support, sales and services, plus a network of technically advanced distributors in emerging markets. Customers include automotive and off-highway manufacturers and suppliers; aerospace and defense firms; makers of consumer, electronics and medical products; raw material providers; and companies in the oil and civil engineering industries. ABAQUS is privately held and is headquartered in Providence, Rhode Island. (www.abaqus.com)

ABAQUS(r) is a registered trademark or trademark of ABAQUS, Inc., in the United States and other countries. All other brand names, product names or trademarks belong to their respective holders.