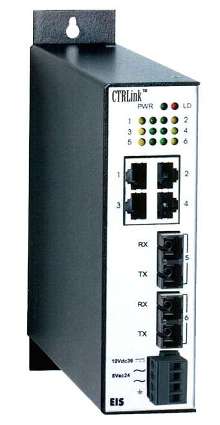 Downers Grove, Illinois (September 10, 2002)-With the industry s widespread application of fiber optics, Contemporary Controls® announces its new Industrial Ethernet series (EIS) integrating switching technology and fiber optics for network operation with high throughput and minimum downtime. With the introduction of the EIS6 models, they are ideal for real-time industrial use requiring networking distances up to 15 km (single-mode) and immunity to EMI/RFI.

Each twisted-pair port automatically negotiates with its attached device the data rate for that port, be it 10 Mbps or 100 Mbps. The flow control mechanism is also negotiated. For full-duplex segments, the PAUSE scheme is used. To achieve the 15 km distance, the user must run the EIS6-100T/FCS in full-duplex operation.