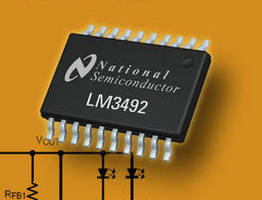 National's LM3492 integrates a boost converter and a two-channel current regulator to efficiently and cost-effectively drive two independently dimmable LED strings with a maximum power of 15W and an output voltage of up to 65V. Integrated fast slew rate current regulators allow high frequency and narrow pulse width dimming signals to achieve a very high contrast ratio of 1000:1. The LED current is programmable from 50 mA to 200 mA by a single resistor.

To maximize the efficiency, dynamic headroom control (DHC) automatically adjusts the LED driving voltage to a minimum level. DHC also facilitates a single bill of materials for different number of LEDs in a string, which is required for backlight panels of different size, thereby reducing overall development time and cost.

The LM3492 includes a versatile COMM pin which serves as a bi-directional input/output pin interfacing with an external MCU for command and diagnostic functions.

Offered in a 20-pin thermally enhanced TSSOP package, the LM3492 is ready for design on National's WEBENCH® LED Designer at www.national.com/analog/webench.

For more information or to order samples, visit www.national.com/pf/LM/LM3492.html.

Available now, National's LM3492 is priced at $1.75 and the LM3492Q with AECQ-100 Grade 1 qualification is $2.10 in 1,000-unit quantities. More information about National's lighting products is available at www.national.com/analog/led.