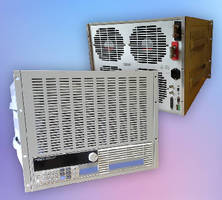 With input rating of 0–1,000 Vdc at 0–120 A, Model EL9718E-M1 is capable of sinking 6,000 W of input power. All connections are found at rear of unit and can be enclosed for safety. Offering CC, CR, CV, CC+CV, CR+CV modes of operation with dual range 16-bit resolution measurements, load is protected against OP, OC, OV, OT, and reverse polarity. Special features include 999 measurements per hour, constant current mode soft-start, dynamic pulsing, and programmable duty cycles.

The EL9718E-M1 electronic load has been developed specifically to meet high voltage applications and offers the same wide range of easy to use features found across INTEPRO’s market leading EL97 series of electronic loads.  The EL9718E-M1 is perfectly suited to be used in a host of different test environments on a wide range of products in any industrial environment, including; product development and characterisation, test, service, burn-in and laboratory experiments.

This unique High Voltage load has an input rating of 0-1000volts dc at 0-120 amps and is capable of sinking 6000 watts of input power. All connections are found at the rear of the unit and can be easily enclosed for safety. An essential feature when using the unit as a bench top instrument or if integrated into a complete a test system cabinet. All the clear and intuitive to use manual controls and displays are easy to access on the front panel.

As with all the EL97 series loads each unit comes with its own specially written remote software that is easily loaded on to a windows 7 PC which may then control the load via the USB interface module. Once connected to the PC all the functions of the load’s front panel are then clearly displayed on the computer monitor.

The load can be controlled using the interactive PC software or instantly handed back over to the load’s own front panel. In both cases the PC monitor will clearly display the activity the load is performing.

The EL9718E-M1 electronic load has also been designed for easy integration into automated systems using an Ethernet connection controlled by INTEPRO’s open-source PowerStar software suite. With over 100 inbuilt test routines PowerStar will now fully automate the control of the EL9718E-M1 along with other equipment through a user defined test sequence. All the results are captured and sent to a SQL database.

Simon Tanner, European Sales Manager of INTEPRO SYSTEMS comments, “The flexibility of our new high voltage EL9718E-M1 electronic load is a great addition to our very popular EL97 series of electronic loads. Extending the input voltage to 1000v at the request of a customer re-enforces our belief that our loads are supremely flexible and competitively priced. Our wide range of new electronic loads will allow us to find new customers in small laboratories, OEM’s and education to provide power test solutions from the simplest to the most difficult of tasks.”

Intepro has been the market leader in power supply testing for over 25 years and its systems are used in telecommunications, aero-space, military and other power electronics applications. Intepro has a global reach with direct sales offices in the UK, USA, Ireland and China and a global network of distributors.

Since 1981 Intepro has supplied users and manufacturers all over the world ATE systems to test power electronics used in a wide range of applications. Our knowledge and expertise in moving and measuring power makes our system unparalleled for production testing, ESS screening, repair and characterization of power components and sub-assemblies used across all industries.

Intepro Systems manufactures, develops and services complex instrumentation and systems for the test and design validation of power supply systems and their components used in aerospace, military, telecommunications, and other power electronics applications. Leaders in power supply testing; the company has a global reach with direct sales offices in the U.K., Ireland, China and the USA, and distributors covering the rest of the world.
Share