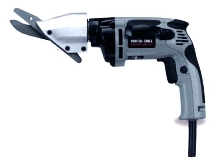 The model 6603 shear has 18-gauge steel and 20-gauge stainless steel cut capacities, with the ability to make a 7/32" cut with no bending or burring. Available in mid-June, the model 6603 is expected to sell for approximately $160.

Designed to make fast, smooth cuts with fiber cement siding up to 5/16" thick, the model 6605 will be available in mid-June and expects to sell for approximately $230.

Porter-Cable Corporation (www.porter-cable.com), a subsidiary of Pentair, Inc. (NYSE - PNR), is a leading manufacturer of portable electric and cordless power tools; air nailers, staplers & compressors; generators; pressure washers; and related accessories for the professional woodworking, commercial/residential construction, plumbing, and electrical markets. With its manufacturing operation centralized in Jackson, TN, Porter-Cable operates a second manufacturing facility in Steinheim, Germany, where its products are produced and sold throughout Europe under the FLEX brand name.
Share